We’ve reached about halfway in most of the dramas that are currently on air, and my opinions have shifted with each episode to what I’m feeling for each drama now. There might be some mild spoilers ahead for those of you who haven’t been watching these dramas or aren’t up to date just yet for any of them, so be forewarned before you proceed. This entry will feature Cinderella’s Sister and subsequent entries will be about the others. 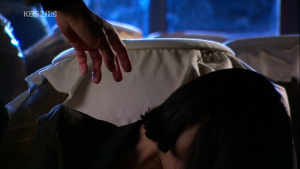 I’m starting with Cinderella’s Sister because that was the one that had held my interest most since its premiere. But the precipitous drop in the quality of this drama just goes to show that my hopes for it were too high. Just because the first four episodes were charming and wonderful, I allowed myself to expect that the rest of the drama would stay that way, but it’s taken a horrible, regretful turn for the worse and I can only weakly hope that it’ll get better in the episodes to come. However, like I said in my previous post, Moon Geun Young is still killing it as Eun Jo. The drama has become more melodramatic, which was to be expected, with quite a few crying scenes in each episode. The two female characters played by Moon Geun Young and Seo Woo are being fleshed out nicely. Eun Jo’s vulnerability is rearing its head more frequently now that she’s come to care for her stepfather and Ki Hoon has come back into her life. 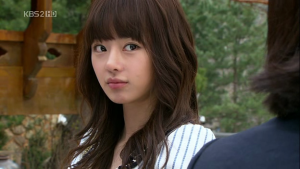 The scenes when Eun Jo looks out for Hyo Sun break my heart because I wish she’d show Hyo Sun that side of her, but at this point, I think Hyo Sun is at the point where she’s past reason and now has taken to chalking all of her sister’s actions as deliberately trying to one-up her. It’s sad that Hyo Sun’s true enemy isn’t her sister, but herself. She has taken a dark turn much quicker than I expected, and there have been a few moments when she scared me with her two-faced tendencies. 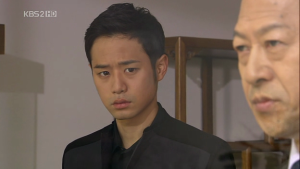 Ki Hoon has been confusing the heck out of me. What are his motives? What does he want with Dae Sung Cham Do Ga? I gotta say, his studying abroad did him good because he’s so damn sexy in those suits he’s always wearing, but Chun Jung Myung is doing a good job portraying a dark side to Ki Hoon that we weren’t able to see before. It’s almost as if there’s a constant shadow across his face that disappears just when he lets his guard down. 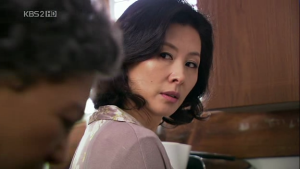 Eun Jo’s mom has become almost a caricature now.. Lee Mi Sook is still acting her character with great complexity, but how is it possible that her character still hasn’t changed when it’s been almost ten years since she got married to Hyo Sun’s dad? Where’s the character growth? Will it be Eun Jo that ultimately drives her mother to grow up and start living as an adult?

Episodes 5 & 6 were good (although I didn’t enjoy them as much as the first four), but episodes 7 & 8 were incredibly disappointing. The only things that I truly loved about these episodes was the progression in the relationships between Eun Jo and her stepfather, and Eun Jo and Jung Woo. It’s almost as though Ki Hoon was such a huge presence in her life before he left that she needs both her stepfather and Jung Woo to fill that void. Taecyeon still isn’t as bad as I expected him to be, and he had much more dialogue in episodes 7 & 8 than he did in the first two episodes he appeared in. I’m still not sure about his acting yet, but he’s doing a better job than I thought he would in the presence of his much more seasoned fellow sunbae actors and I have to give him credit for that.

2 thoughts on “The Halfway Mark”

When Love Walked In

Fashion 70's
Flower Boy Next Door
Hello Franceska
La Dolce Vita
Mixed-Up Investigative Agency
My Sweet Seoul
Ruler of Your Own World
Who Are You?